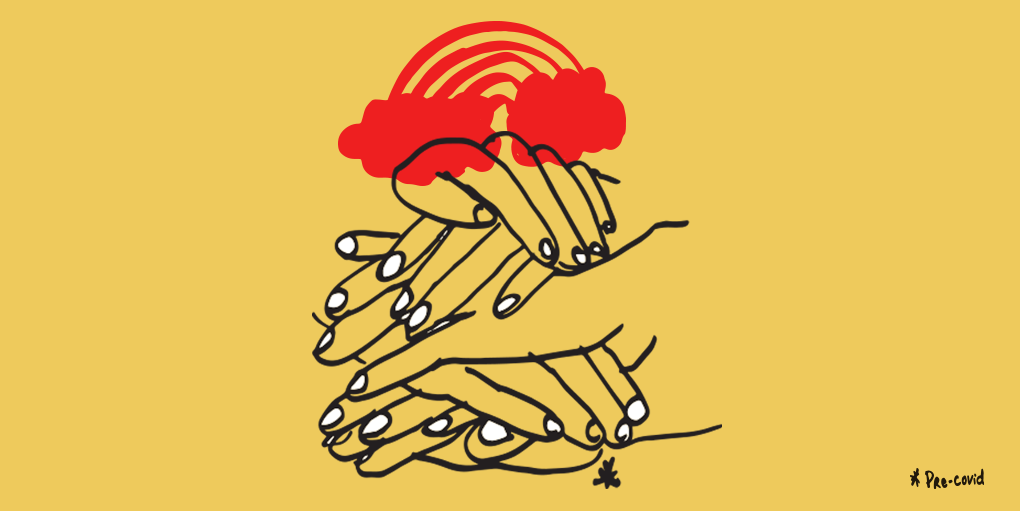 There are two broad categories of designers at Fuzzy Math, UX designer and visual designer. Generally, our UX designers focus on information architecture, interaction design, user research, and everything else that deals with the ‘what’ and ‘how’ of a product. Our visual designers, on the other hand, are focused on developing or expanding a product’s design system, translating brands to digital products, and working on the user interface as well as the overall look of the products.

Every company defines UX design and visual design roles a little differently. So, although this is how we split our tasks among designers, it is not the only way!

One question we frequently hear from design groups, student groups, and even clients from time to time, is: How do your UX designers and visual designers work together? The implication of this question is, of course, that there’s often some level of conflict in the handoff between UX and visual designers. That being said, a new question arises: What’s different about how Fuzzy Math works together that doesn’t result in conflict? In order to provide some clarity on this, here is a breakdown of how our team works together and some tips on how to avoid conflict on your design teams.

Make sure everyone is in the room from the start

One thing we do here at Fuzzy Math is make sure that everyone is always kept in the loop. Our UX and visual designers are working together from the beginning on all projects that require UX and visual design expertise. We are also adamant about hosting a kickoff meeting for every new project to get everyone aligned on the project’s scope and goals. This meeting includes project stakeholders, visual and UX designers, project leads, and so on. It’s a chance to talk through the project roadmap and ensures a clear understanding of the weeks/months ahead. The kickoff meeting is also a chance to get both UX and visual designers in the room with the client so any clarifying questions or concerns can be addressed together at the start. Everyone hears the same information at the same time rather than having things “telephoned” to them, which would make it more likely for something to get lost in translation.

We are a bit different than most in that our visual designers are involved in the process from the very beginning and have insight into the process throughout. They participate in early research, continually review wireframes, and the handoff is always a conversation between UX and visuals. I think at most other places, they are given approved wireframes and are asked to not make any big changes and it leads to conflict when they do. I think our way makes way more sense.

Although our typical projects may start off very UX-focused and later move into being visual design-heavy, everyone is kept in the know as the project progresses, despite their role or title. This means having everyone present during client meetings as well as regularly scheduled internal project check-ins. Doing this gives everyone a clear understanding of where the project is and what steps are needed in order to move forward. Everyone is allowed a chance to talk through any roadblocks or ask questions they might have about their tasks and may also ask for general feedback before delivering something over to the client.

The design thinking process we use helps encourage this melding of perspectives. By including visual designers in the full UX process, we are along for the whole ride and iterate with and alongside the UX designers. This helps avoid designing in silos that ultimately don’t help the users.

Keep everyone up-to-date on research findings

UX research naturally spends a lot of time focusing on understanding who the users are and therefore requires a lot of primary research. Things like surveys, ethnographic research, and user interviews help us better understand what type of people use a product, what their needs and pain points are, and so on. While most of this research is in the hands of UX designers, we make sure that our visual designers are not left in the dark.

For instance, when we conduct user interviews it’s standard practice for us to have an interviewer and a note-taker present. This often results in a visual designer sitting in on user interviews as a note-taker while the UX designer speaks with the user. By doing this, visual designers can hear directly from users rather than just reading over interview notes taken by someone else. While this doesn’t mean that visual designers are present for every user interview, the fact that they are able to hear directly from users and are an integral part of the interview process allows them to better understand who they are designing for. With this information, in addition to findings reported during regularly scheduled check-ins with the rest of the team, visual designers are able to also inform their own discovery research.

Developing a design system or making updates to an already existing one is a major task for visual designers. That being said, they are thinking about what the product’s design system is going to look like and what components a product is going to need from the very beginning. In order to figure this out, they have to do a lot of secondary research where they are looking at competitor’s products and researching different design systems to see what could work for our clients. Visual designers have to consider the things they hear from stakeholders and users in order to develop a system that will work for the final product. Naturally, visual designers will consult with the internal team for general feedback and insights at check-ins so that everyone is aware of what the visual direction of the project is shaping out to be.

Design with a constant feedback loop

Traditionally, a handoff is a point in a project where one person or team “hands off” their work to another person or team in order for them to start their work that is informed by the materials received. It’s easy to imagine that for a UX design project that means UX designers would provide all of their research materials as well as things like wireframes and other purely UX design deliverables over to visual designers so they can then design the product’s visuals. In reality, however, that is not how our projects are run.

We don’t have an official handoff that moves the work from purely UX to purely visual design. Instead, there’s often a lot of consultation between UX and visual designers. During the design phase, everyone has a clear understanding of both user and client needs. At this point, it’s just a matter of using all of that information to design a product that works for everyone.

Fuzzy Math UX and visual designers are especially communicative during this phase. There is a continuous back-and-forth to help out with small tweaks and updates to design deliverables, all in order to ensure that a product is usable and ready for client review.

UX and visual designers work well together at FM because we have the same goals for the outcome of projects — making the product better for the user. In reality, UX and UI design are not separate entities. They complement and inform each other. Sometimes it can feel like UX and visual designers are at odds with each other, but that small tension produces better, more thoughtful results.

Our regular communication and back and forth keeps everyone accountable to the project and doesn’t leave it up to one individual or team to handle the end result. We create our best designs when working hand-in-hand from beginning to end. While some tasks are led by UX designers and others by visual designers, at the end of the day, everyone is working to create the best product possible and provide users with a positive experience.

Are you interested in learning more about how Fuzzy Math can help you or your team create better products? Contact us today for a free UX consultation.