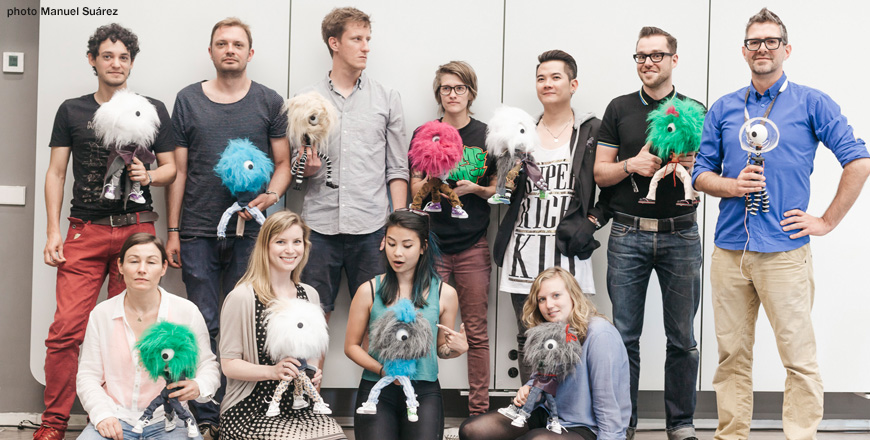 Benvinguda to Fuzzy Math’s recap of the OFFF 2015 conference in Barcelona. We’re organizing our blog posts around the experiences and take aways from this three day conference. This post marks the third and final day of the conference. If you missed the previous posts, go ahead and indulge yourself in reading the intro, day 1 recap, and day 2 recap.

The last day of the conference began with a four hour workshop, and I wasn’t entirely sure what it would entail. I knew I was going to be building a robot, but what was a robot really? The word robot brings up a slew of different images in my mind ranging from a Furby to the Terminator, to even more terrifying things.

“I can learn a lot from raising robots, especially about what it means to be human.” – Jan De Coster

Who is a better person to teach me about robots than someone who designs them himself?! Jan De Coster led the workshop. He is a robot designer out of Belgium, his start was in character design, and he shifted into robot creation thanks to a mere request from an agency: “Can you build us a robot?” they asked. Not quite sure what he was getting into, he said, “Sure!” You can read more about his start in this nice writeup he did, which also discusses the idea of robots having souls.

At the conference, I named my robot ‘Bruce,’ which is also the name of my step-cat (very creative I know). We were to bring our bots to life, give them souls, and give them a personality and some character. If Bruce were a human, he would be a little Lee and a lot of Springsteen. Jan was very passionate that we take care of our new friends and that they were not just plastic and wires. He genuinely cared about Bruce’s welfare. Unfortunately, Bruce had to stay in Barcelona, but I am sure he is enjoying the beach or a delicious rum drink from Tiki Tahiti (seriously this place was the best!). I will see you again, Bruce, save me a seat.

I had a great time birthing my baby boy Bruce and challenging myself to bring human qualities and emotion to an otherwise bundle of inanimate components. Here is a little insight to our process:

If you are interested in making bots with Jan, which I highly suggest, he is starting a robot school that teaches classes and does workshops on building robots.

Laika is an animation studio out of Portland, Washington that creates handcrafted animations for features and shorts. Some of their work includes Coraline, Boxtrolls, and Paranorman. Creating life is at the core of what they do: they take everyday objects —mostly from scratch — and give them a soul and vitality to help tell amazing stories.

With Coraline, they paved the way for completing the first handmade stop motion animation movie shot in 3D. The dedication and vast amount of skill that goes into making films such as Coraline includes the help of set designers, illustrators, engineers, clothing designers, animators, puppeteers and many other creative talents across a multitude of disciplines to tell the right story.

The general process (as far as ideation to realization is concerned) has ranges of levels of fidelity similar to the UX wireframing process to UI handoff. They start with hand drawn sketches and animations, the characters get made into 3D CG animations just to be printed by the 3D printer, then real tactile puppets are made (including hand-sewn costumes) and are animated in the sets. Finally, some post- and CG green screen effects are added.

Some bits that I found interesting: 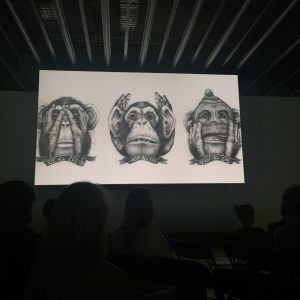 I am not sure how to describe Pat. After I heard him speak, I wanted to be his friend, have a coffee, and sketch with him. I want to call him an activist, but I am not sure he would necessarily call himself that. He had a lot of passion and angst that one needs in order to be an activist, but really the things he was rallying for and that are shown through his art, we should all be concerned about. Labels aside, he comes from Michigan and he is an extremely talented illustrator and photographer. I personally love every piece of his I have seen and want to know the story and the adventure behind each one. I will leave you with points from his talk, because I personally found inspiration in each of them.

OFFF, I enjoyed you. You gave me some needed revival and kumbaya time to help refresh and inspire me back at my 9-5.

In the words of the terminator…