This summer at Fuzzy Math, we are exploring the impact and interactions of wearable technology as each member of our team participates in a three-month-long project to explore the ins and outs of these devices. This endeavor will be broken down into three phases: 1) first impressions and getting to know one’s wearable device, 2) empirical evidence and applications for it, and 3) heuristics for each category of devices. This summer-long study is comprised of three separate category groups for the sake of tracking and analyzing data and findings. These groups are activity, awareness, and sleep. For more information, read our introductory post on this project and follow @fuzzymath on twitter, hashtag: #fmwearables.

After a fair amount of research, I narrowed down my decision of which wearable device to test out for the summer; I chose the Misfit Shine for tracking my activity during the Fuzzy Math Wearable Project. Coupled with a fair amount of skepticism, I dove in head first with a general sense of wonder on just how much this tiny little device could impact my behavior. So without further ado, let’s meet the Misfit Shine.

Battery Life
Up to six months

After a solid week of research and trying to track down the best possible device for myself, I landed on the Mistfit Shine. Initially I was trying to find an “analog” wearable, to see how well it stacked up to the new kids on the block, but it was much harder than expected. I was also interested in challenging the notion that only the newest devices out there can encourage change or track accurately. I quickly realized that my only options for straight analog were either a good old fashioned pedometer, or something billed as analog but in actuality had Bluetooth just like all the others.

There were a couple of absolute must haves I was trying to find, and the Shine fit the bill for both. Most importantly, I did not want to mess around with charging my wearable. At all. With enough cables and chargers already wrapping around my nightstand like a tiny electric octopus, I was determined to keep it cable free. Not to mention trying to worry about one other thing to plug in all the time or forego tracking my data didn’t seem all that appealing. Nothing to plug in or charge? Check.

The only other requirement that I had for my wearable was something I didn’t have to put on my wrist. That narrowed things down pretty quickly, and after reading a fair amount of reviews on the Misfit, I decided it was the way to go. I wasn’t immediately sure whether the Shine met my criteria or not, since the only time I had ever seen it was either on someone’s wrist or clipped to their shirt. After a little investigation, I found out that carrying it in your pocket was A-OK. Pocket friendly? Check.

One other aspect that was a “nice to have” was the ability to get access to the data. As a self proclaimed data nerd, I really wanted a wearable I could “crack open” to see the data under the hood. After a little digging around the interwebs it seemed like the Shine could be set up to spit out data outside of the app. With an API and a handful of random experiments on GitHub, things looked promising. Access to data? Check.

With both must-haves satisfied and one nice-to-have in the green, I was full speed ahead to the Misfit Shine! Next up, unboxing and using it.

The Experience (so far)

Let’s just get this out of the way from the start: I like the Shine, but I’m not in love with it so far. It’s been a bit of a roller coaster in terms of my fondness of the Shine with things starting out pretty high and diving and climbing from there.

Unboxing the Shine was pretty awesome. The level of Apple-esque detail they’ve put into the packaging starts things off on the right foot. The device definitely appeals to those looking for a minimalistic activity tracker, and the package follows suit. I actually found myself unboxing the Shine much more slowly than I thought I would, only for the fact of enjoying all the little details. The best part is how the Shine is held to the center by a magnet behind the package giving the effect of it just waiting there for you to pick up. Definitely a “Great Scott!” moment. Top of the roller coaster hill! Whee!

Cracking open the app for the first time, the app is extremely well designed and the first run experience is pretty snazzy as well. It has a nice step-by-step walk through outlining the different areas of the app, though I wanted to get to the real nuts and bolts and get the Shine synced to the app, so I skipped through it fairly quickly. At one point, I was a little surprised by how many screens I was still swiping through. 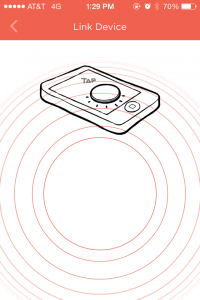 Syncing the Misfit to the app itself was cool, and they added a decent amount of whimsy in there to take it over the edge. Trying to suggest some sort of magic between the Shine and your phone, the app suggests you place the wearable right on your phone, after which you start to see a little animation start on the screen and the lights start lighting up on the Shine itself. I dig the production value and actually had a little moment of delight the first time I saw the lights start whizzing around as the device paired with my phone. Even after a few weeks of use that’s still my favorite part about the Shine (seeing those lights start to go round as my data is magically pulled into the app).

Overall, using the Shine has been ok. There have been a few instances where I had to fight to get my data to sync but eventually it did. One of the biggest drawbacks so far has been trying to get my data out of the app. While the app itself is visually appealing, the data collected there is hard to interact with outside of the few callouts below the daily chart showing you where what your day looked like. Originally I had intended to utilize the API to get my data out and really dive into it. After a bit more research and gaining access to the development tools, I realized this probably wasn’t going to be the best choice. In need of a quick workaround, I ended up setting up an IFTTT recipe to export my daily sync to a Google spreadsheet. The ultimate goal here is to get an idea of a baseline and see if I start to unconsciously change my habits.

The Not So Great…

A few sticking points have come up so far — most of all being the “tap” required to see how much progress I’ve made on my daily goal. Often, no matter how many times I tap, nothing happens. Even worse, sometimes I’ll tap once and somehow trigger the “special event” tracking which is usually before setting it down on my nightstand — ultimately tracking that as sleep. I’ve thought that maybe it was something I’d figure out the more I used it, but consistently I have been unable to tap and see my progress.

The other main issue has been the fidelity of the data I am allowed to export via IFTTT. I have a very basic chart set up in the Google spreadsheet tracking overall progress but have no expectations that it will allow me to do any deep dives or gain any true insight, which is disappointing to say the least. The sync with IFTTT isn’t great either. After waiting a few days to sync, a handful of days were skipped from being added to the spreadsheet, so I’ll have to go in and enter manually now if I want the data.

In a nutshell, the Misfit Shine is a beautifully designed product, with an equally beautiful app. Unfortunately, the robustness of the data still needs work, and I’m hopeful the team at Misfit will continue to work on adding more options to the app, including native export abilities. In the weeks to come, it will be especially interesting to see if I become more and more aware of the Shine in my pocket, or if I lose interest and start to forget about it. I’m also hopeful now that I have a solid baseline to refer back to as I start to become more aware of changes that I can (and should) make to my daily activity. Only time will tell. Stay tuned!