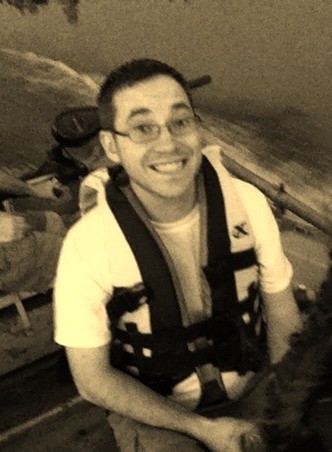 If you’ve read a Fuzzy Math Focus post, you know that these tend to revolve around generally the same set of questions: where are you from, where did you go to school, what led you to UX, etc. For this edition, Carl got creative and opened up the interview process to anyone at Fuzzy Math who wanted to ask him a question about what gives Carl his Carl-ness. This in and of itself is one reason we enjoy working with the guy… read on and you’ll quickly discover the others!

How does your background in pharmacy affect your role as a user experience designer at Fuzzy Math?

I’d like to think my few years of working in a pharmacy are directly applicable to being a designer. Most importantly learning to listen and empathize, especially since people don’t usually come to the pharmacy when they are feeling 100%. Since listening and learning to ask the right questions are about 90% of what a UX designer does, I like to think I’m fortunate to have had a lot of practice early on. I’m also really good at quickly counting things by five, but that hasn’t come in handy yet.

How would your twin brother make a great UX designer and you a great audio engineer?

I’m just going to answer this diplomatically instead of as a brother, and say we are both doing exactly what we should be doing. But I’m probably better. And a minute older.

When did you learn about the term “UX” and what about it led you to pursue a career in the field? Why Fuzzy Math?

After undergrad, I realized that while I really enjoyed the molecular biology side of things, I enjoyed my non-biology classes (3D design, art history, design and innovation, etc.) a bit more and really wanted to focus on those kinds of topics. I knew that grad school was likely the best route, and it was after finding out about DePaul’s Human-Computer Interaction (HCI) program that I really started to learn that this crazy thing called “UX” existed.

My first encounter with Fuzzy Math was actually in my first class for grad school where Jason, one of the former partners, told me they had internship opportunities and I should apply. I did, and I haven’t looked back since! 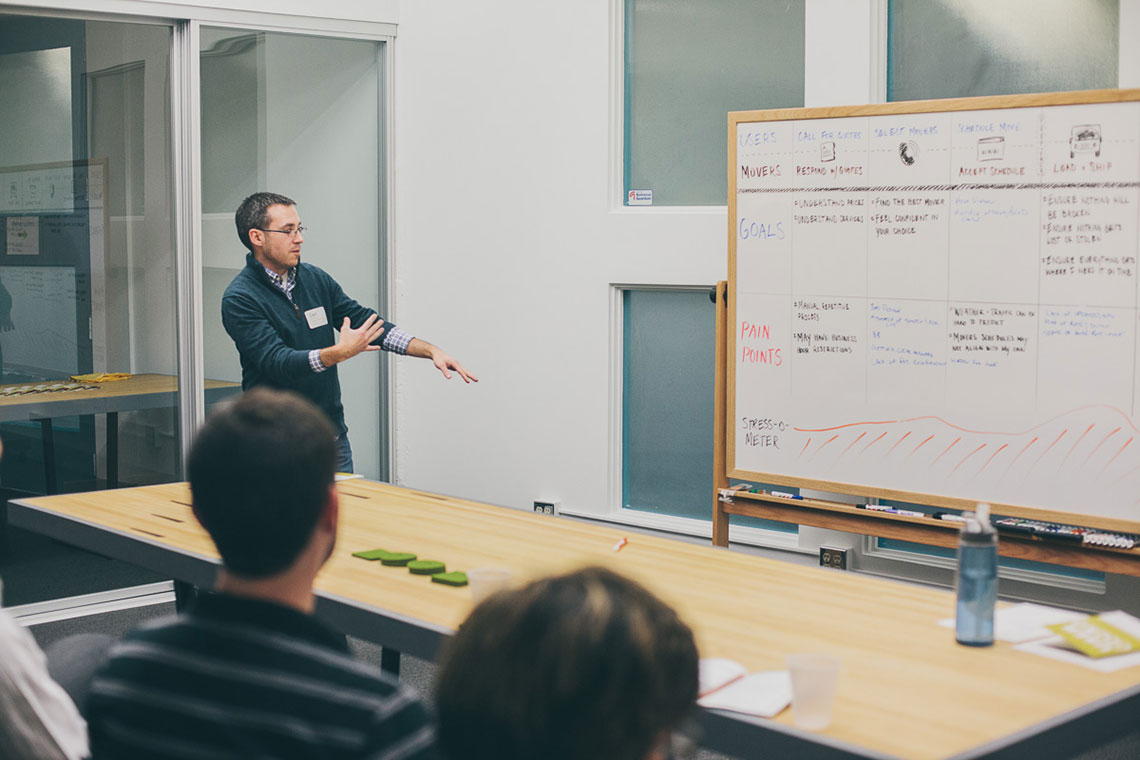 On a scale of 1 to Doc Brown, how much do you love the University of Illinois?

Assuming Doc Brown is the absolute best (which he totally is, unless it’s Back to the Future Part II Doc Brown, in which he’s just ok) it would absolutely be Doc Brown! Great Scott!

Follow-up question, why did you choose Chief Illiniwek?

I think this is asking why I chose to go to the University of Illinois for my bachelor’s degree, which was a tough choice between graphic design at another school or biology at the hometown school. Ultimately I choose to go there because I was afraid I wouldn’t be able to get a job if I went in the design route. Funny how things come full circle. 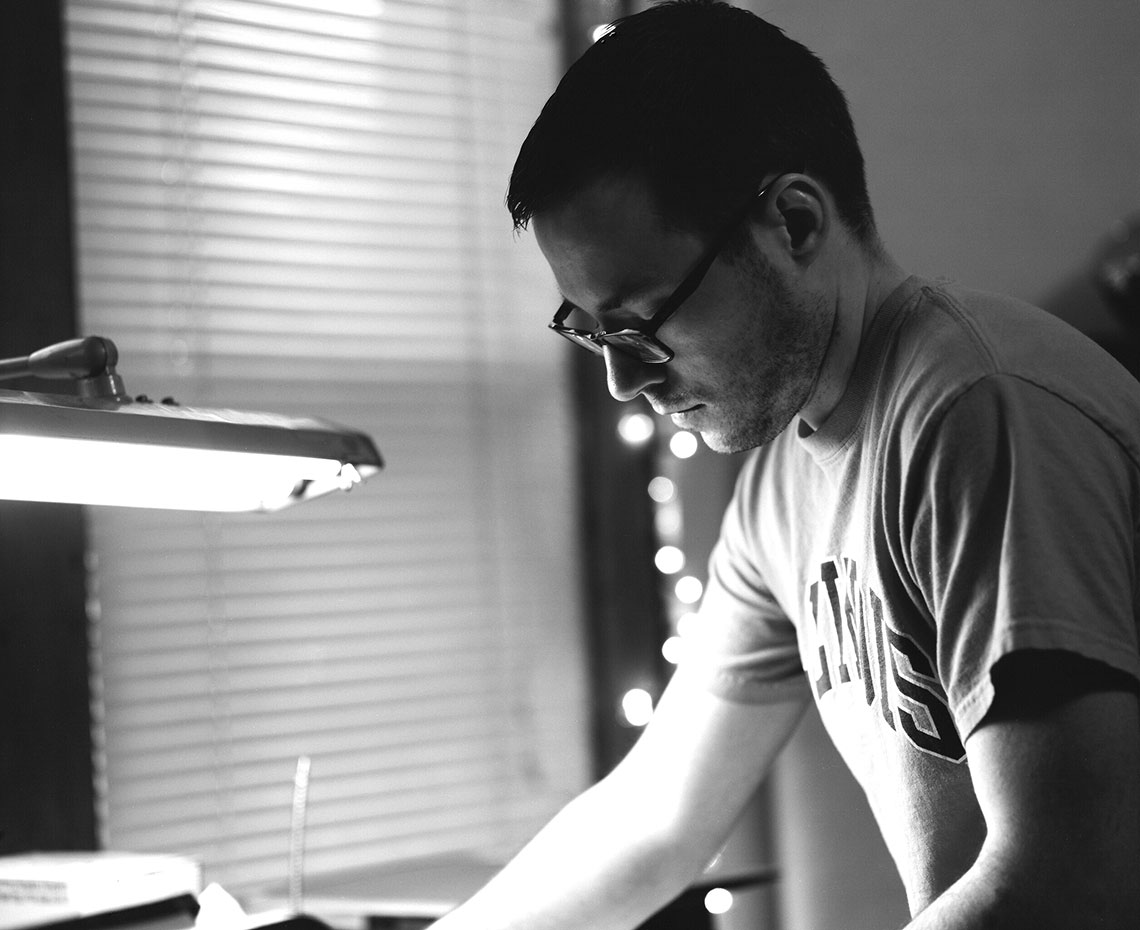 After almost five years of working in the UX space, what’s your favorite part — either a document or phase — of the process? What’s your least favorite and why?

This is by far the hardest question to answer out of the bunch. Honestly thinking about it, there were times when I’ve loved every aspect of the process, and other times where the same pieces have felt more challenging.

“It’s usually out of that moment (or right on the other side of it) that those little pieces you’ve boiled everything down to start to come together again, and you hit your ‘eureka’ moment.”

If I had to hone in on this, I’d say I’m beginning to realize more and more that I really enjoy being “in the trenches” designing. Whether it’s wireframes, sketching, or a whiteboard session, seeing it all come together and being able to apply all of the learnings from research and discovery are my favorite. The moment right before that is probably my least favorite even though I know it has to happen. Right before it all comes together, things are usually a big ‘ol ball of yarn to be untangled. The old adage, “It usually get’s worse before it get’s better,” seems to ring true.

There’s a point when synthesizing all of the information gathered into tangible pieces where it seems like you can push past the point of clarity, and things begin to make less and less sense. It’s usually out of that moment (or right on the other side of it) that those little pieces you’ve boiled everything down to start to come together again, and you hit your “eureka” moment. Even though it’s not my favorite part, I realize how important and valuable it is and know when I hit it, the good stuff is right around the corner. 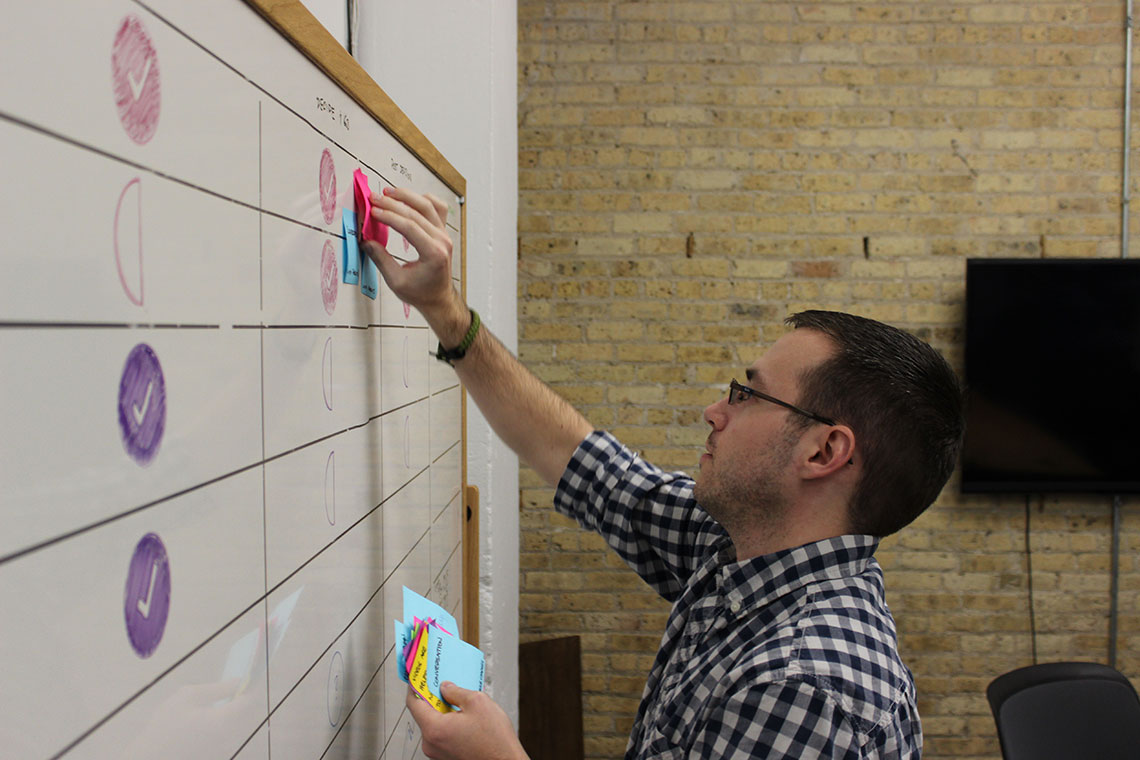 How did you get into the letterpress/analog stuff you do?

I originally bought a letterpress poster from a shop in St. Louis, that was also an entry into a contest to win a letterpress. I didn’t win, but strangely enough a year later that same shop was selling one of their old machines on Craigslist. I bought my first press and things have quickly gotten out of hand ever since. I’ve upgraded to two larger presses, moved everything out of my dining room, and have turned it into a makeshift letterpress shop. I also have a very serious problem “rescuing” wood type from eBay.

I’ve always been a fan of “analog” hobbies, or making/building things, and when I’m not playing with letters and ink I dabble in home brewing beer too.

On average, how many times per day does your body go through temperature changes? (That window you sit next to seems to play tricks on your internal thermostat.)

I’d say at least a couple. I might be underestimating that a bit.

Also, what is your favorite lunch order from Whole Foods?

Has to be tacos! As long as they have pickled onions, otherwise all bets are off.

What’s your favorite beer and why?

Two Brothers Sidekick or Sierra Nevada Torpedo are my go-to fridge fillers. They taste good and I can find them just about anywhere.